Is there just a single finding, or are there multiple findings?

An intussusception is when a segment of bowel is pulled either into itself or into an adjacent bowel loop due to peristalsis.

Classic teaching is there there is a "lead point", such as a mass, that gets "caught" by the normal bowel peristalsis. The peristalsis then pulls the mass and proximal bowel wall (aka intussusceptum) down through the more distal bowel (intussuscipiens) much like how food normally transits through the bowel.

Although the most common location of intussusceptions is ileocolic (ie distal ileum telescoping into the colon), they can occur anywhere (although gastric involvement is extremely rare).

As one can imagine, this can lead to severe complications:

Although "Lead points" are often found in adults, they are infrequently found in children. Possibile lead points include but are not limited to:

Ultrasound can be highly sensitive and specific and is ideal for children given it's lack of radiation. Look for:

The modality of choice in adults.

When imaged longitudinally, one can actually see the bowel loop telescoping into the intussuscipiens in longitudinal cross-section.

Back to our case.

Did you find the intussusception? Did you perhaps find more than one?

I think I stopped counting at SIX instussecptions in this completely asymptomatic patient being scanned after an MVA (they had other significant extremity injuries). Are there even more?

While all of the above is true, that all applies to pathologic intussusceptions. Here we have NO bowel dilation/obstruction, NO descrete lead points and NO bowel wall edema/hypoenhancement to suggest vascular compromise. Thus these are termed incidental or transient
intussusceptions.

My experience is that these are not uncommon. I can't even count the number of times (nonetheless the number of instussusceptions!) that I have encountered incidentally on asymptomatic patients, often after motor vehicle accidents (correlation? causation? who knows). But again, as long as there was no concerning findings listed above, they have all resolved, even on extremely short term follow up (even within the time between aterial and portal venous imaging!)

While I do tend to mention these in my report, I try to be explicit that they are extremely likely to be transient/incidental in the abscence of symptoms. And if/when the doc calls with concern, you can reassure them that unless the patient has symptoms listed above, they are verly likely to be resolved by the time you are talking.

If you'd like to see other examples, feel free to check out some older Wetread case below. The write-ups were much shorter then, but now they you know all about intussusceptions, it's the imaging that is important right? 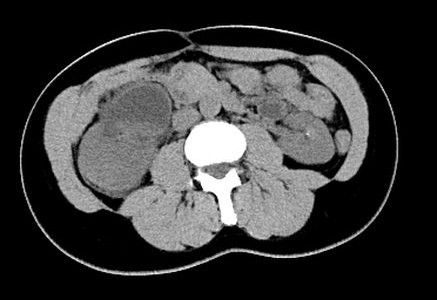